Back to all posts

For the next few posts,  I've decided to share a few of the great reads I did as a reviewer for WVXU's Around Cincinnati from 2010-2020.  Most of the books were from academic presses. And most of them changed or enriched my life in some way.  I'd love to begin with Tree Story by tree scientist Valerie Trouet. You can listen to the review at this link if you prefer. 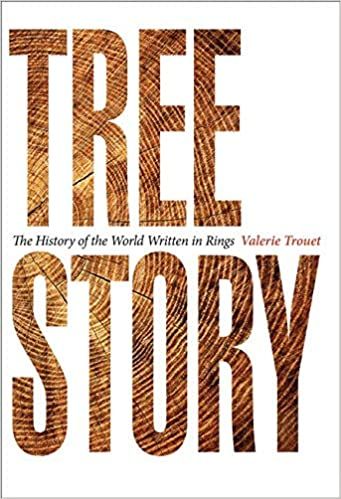 In these uncertain times, plagued too often with the clutter of political rhetoric and bluster, I am grateful for the university press books I get to review.  Many of them are science texts written by exceptionally talented women like Belgian tree ring scientist, Valerie Trouet whose new book from John Hopkins University Press, Tree Story: The History of the World Written in Rings, offers a passionate, yet clear-eyed introduction to the field of dendrochronology—the scientific study of tree rings used to map climate patterns, accurately date archeological digs, and even to determine what caused some civilizations to collapse or disappear.

To invite someone who loves poetry into a science book, it’s probably best to make the reader feel as welcome as possible.  Trouet sucked me in by using one of Mary Oliver’s  short poems as an opening quote:

Instructions for living a life

In one of my poetry groups, we often refer to the skill of beginning poems as “handing the reader the coffee cup so that they can grasp the handle.” Trouet handed me this cup of tree ring science by a handle I could grasp firmly, allowing me to sip at the more difficult charts and methodology while I gulped down conclusions and savored her writer’s brew.  And to delight the songwriter in me, there were chapter titles with music allusions like “I Count the Rings Down in Africa,” “It’s the End of the World as We Know It,” and “Heart of Gold.”

One of the conclusions I was able to take away from Trouet’s discussion of tree ring science is that tree rings can be employed as accurate archeological dating tools, far surpassing carbon dating and other methods in accuracy once adequate samples are identified and cored.  She opens the book with an account of how dendrochronologists were able to accurately date the ring patterns in the wood in a Stradivarius violin to ascertain that it was the genuine article.  She also describes how tree rings scientists help archaeologists accurately date sites in the Americas by analyzing preserved or water-logged wood samples.  Because dendrochronology sits at the nexus of ecology, climatology, and history, it reveals the interaction between human history and environmental history.

Perhaps one of the more compelling roles of tree ring science is its ability to measure human impact on the planet as the discipline addresses the issue of climate change.  While opponents of climate change have argued that most of what we are experiencing in the 21st Century is simply a cycle that the earth has been through many times before, these opponents offer little proof for their conclusions.  Tree ring science graphs those cycles, often going back as far as 12,000 years in some cases, by studying ancient trees, roots and water-logged samples.  Trouet discusses some of the major cycles in climate through the lens of counting rings and then comparing the data to other scientific and historical accounts.  What she concludes about most of the earth’s cooling and warming cycles is that they happened in correlation with seismic, volcanic, and solar radiation activity and seemed to occur in somewhat regular cycles during humanity’s tenure until the 20th Century where the warming factor spikes to produce a graph referred to by dendrochronologists as The Hockey Stick.  Evidence supports that our humanity’s carbon footprint has led to this prominent spike in warming.

Trouet offers the reader glimpses into what tree ring scientists do on a typical foray to gather data from trees, starting with the information that no gathering of samples is ever typical.  Some of her field studies send her to mountain peaks in Greece to sample 1000-year-old trees with heavy boring equipment that must be packed up the mountain as well as back down along with the core samples gathered or even sliced portions called “cookies” when a tree is felled.  She also takes us along to a remote area in Russia where the “road” is lined on either side with thick forest and pocked with three and four feet deep mud holes. Her fellow scientists on that field study are all men who work round the clock hours in 95 degree heat, stopping only to eat every six hours or so.  And then, she shares her much easier solo adventures coring trees for fire wounds in the Sierra Nevada range while staying in U.S. Forest Service digs.

Perhaps I was most affected by the sections where the author links the fall or disappearance of past civilizations when those cultures meet the perfect storm of climate change, pandemic, and economic disruption.  It all started to sound a little too familiar.  At some point Rome got too comfortable with its “necessary” leisure activities, ignoring the farmers and their plight.  Large groups of people began to migrate across the continent to escape drought, famine and war.  And then, there was an outbreak of malaria.  Similar circumstances plagued the fall of many cultures in our history.  Valerie Trouet and tree science offer evidence that some cultures find ways to pivot and live with the changes.  When the Norse had to back off their settlements in Greenland because of a new ice age, the Inuit perfected their walrus-hunting and thrived near the site of those abandoned outposts.  In a time  where humanity has an increased environmental impact, there is always the chance to make a crucial turn.